Hi everyone,
A launch that was most expected from the Catalan fans: The FC Barcelona Home kit. Nike unveiled the FC Barcelona home shirt for 2011-2012 season.  The official launch will officially take place on Tuesday night at 22:00 spanish time.

The FC Barcelona home shirt obviously features its traditional vertical stripes. A different execution for the stripes make this kit interesting. From bold to thin from left to right and vice-versa from right to left.

The FC Barcelona’s woven crest is placed on the left chest and on the inside, next to the heart, “Tots units fem força” (All United, We Have the Strength) is printed. Similar approach to the French kit with “Nos differences nous unissent“. 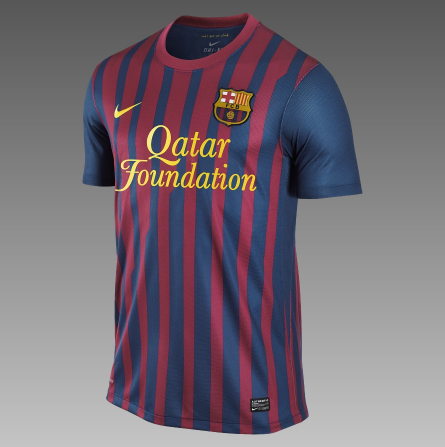 I have mentioned on this blog the partnership between Qatar Foundation and the Catalan club. The sponsor logo is centrally printed on the shirt while a club graphic and league badge adorn the center back and right sleeve. Unicef is still present on the shirt, but with less exposure than Qatar Foundation as it appears on the back bottom area of the shirt.

If you are familiar with the Football Lounge, you would know by now that Nike launched for the FIFA World Cup 2010, an environmental campaign where all its kits are made of 8 recycled plastic bottles. The FC Barcelona kit also features the Nike Dri-FIT fabric technology to keep the sustainable approach in global football. 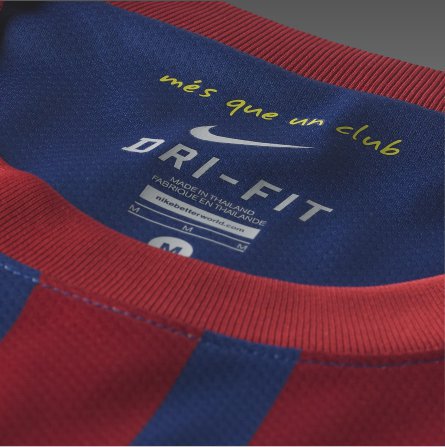 The back neck label is obviously customised to the Blaugrana club with the famous mention: “Mes que un club“. A very strong kit for the Spanish champions. A good mix between tradition, innovation still featuring the sustainable component. Now let’s have a look at the Away kit. Will it looks like this?