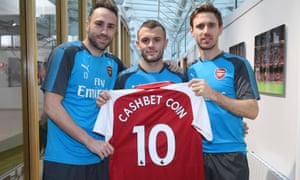 Hi everyone,
Arsenal has signed a sponsorship deal with the US cryptocurrency CashBet, which will see the Premier League club promote the firm’s initial coin offering (ICO) at the 60,000-seat Emirates stadium.
Arsenal is the first time a major global sporting team has officially partnered with a cryptocurrency firm.

The FCA declined to comment on Arsenal’s decision to promote a cryptocurrency, but a spokesman pointed out that the regulator was planning to “conduct a deeper examination of the fast-paced developments” of ICOs and would take “further regulatory action” if necessary.

Vinai Venkatesham, Arsenal’s chief commercial officer, said: “We are pleased to welcome CashBet Coin as our partner. We are looking forward to working with CashBet Coin as they launch their new cryptocurrency.”

CashBet said it was delighted to be able to secure a deal with Arsenal as the firm is “actively targeting a global, multibillion-dollar marketplace of i-gaming content providers, operators and players”.

CashBet, which plans to raise between $40m (£28m) and $70m from the sale of CashBet Coins tokens in its ICO, uses Arsenal’s crest and player’s images on its website and the club describes CashBet as its “first official cryptocurrency partner”. CashBet Coins will initially be priced at 50 cents and are designed to be used on CashBet’s mobile phone gambling apps.

Tim Buckley, the chief executive of investment firm Vanguard, said on Wednesday that his company would never invest in cryptocurrencies because they have no value.

Axel Weber, the chairman of Swiss bank UBS, said on Tuesday that “bitcoin and other cryptocurrencies were speculative, risky and “not an investment we would advise”.

“Retail clients, who don’t fully understand these products, should be protected from going into these products, because if there is a retail client affected in the future, the question will be again: ‘Who was the bank that sold them these products?’ and then banks will be blamed again for what has happened,” he said.

The consultancy Ernst & Young warned that ICOs are at risk of cybercrime. Of the $3.7bn raised in ICOs last year, about $400m has been stolen by hackers, according to an EY analysis.

Major move from Arsenal for inking a deal with cryptocurrency company. It’s interesting how banks are quickly raising a red flag at cryptocurrencies that are a clear threat to their business model and modus operandi. The future is now. [Source: The Guardian]